The conference Munich Exchange was held on the 26th of April 2018 in the context of the exhibition African Mobilities. This is Not a Refugee Camp which opened a day before at the Architekturmuseum der TU München. It was one of 7 exchanges held in cities all over Africa and in New York, each of which was represented in the group of about twenty-five people who spent the day in the Vorhoelzer Forum. In addition, students from the TU München and a few local visitors were in and out of the Forum throughout the conference. It was opened by professor Andres Lepik, and the curator of African Mobilities, Dr Mpho Matsipa of Wits City Institute, University of the Witwatersrand, Johannesburg.

The conference underlined the importance of intellectual mobility within Africa, which is one of the themes addressed by the exhibition. This includes both the gathering of intellectuals to exchange ideas and the spread of ideas among people outside of these intellectual circles. The presentation of Mabel Wilson and Mario Gooden for example, using an analysis of the expressway in New York, discussed the instrumentality of architects in organising spaces and systems in which African and black bodies either are or aren’t free to move. This stressed the importance of architects including all people in their vision.

Intellectual mobility in the context of an exchange between Africa and the global North was addressed by Ikem Okoye, who spoke about the coexistence of nomads and people living in permanent settlements. Using an image of historical Timbuktu which shows a mixture of permanent and temporary housing, he illustrated how these two groups successfully co-inhabited the same space. He emphasised the exchange of ideas and goods that took place between those groups. In light of the recent influx of refugees perceived as a crisis in Europe, this shows that it is possible to learn from traditional African architecture and urbanism in other parts of the world, today.

The exhibition African Mobilities is itself a space that allows for an exchange of ideas between Africa and Europe, and is revolutionary in this capacity. Past exhibitions at the Architekturmuseum such as Afritecture. Building Social Change have reflected the increasing interest within the architectural field in the continent of Africa. This is due to a renewed interest in “social architecture” – architecture that concerns itself strongly with the impact it has on communities, gaining popularity especially in Africa where attention toward matters of societal resilience and development are indeed urgent. Despite this, there has not been a true renaissance of traditional African architecture. There are still only few architects like Francis Kéré who are known for pushing the boundaries of contemporary African style. A great impediment to this is the difficulty that institutions like the Architekturmuseum face in turning away from the established colonial point of view when broaching the topic of Africa. In African Mobilities, the self-reflective gaze of a curator from within the continent shows us a point of view wholly detached from this colonial pigeonhole.

The forward-looking aspect of the exhibition is emphasized by the bold exhibition design. The ceiling high yellow walls completely transform the rooms of the Pinakothek der Moderne. Entering them feels like being sucked in through a vortex to another place and time. The exhibition opens with a flashy exhibit which includes a VR experience. Olalekan Jeyifous and Olawale Lawal’s Mad Horse City imagines the ever growing slum of Makoko in Lagos, 100 years in the future. As the artists imagine how the overpopulation and marginalisation of the slum can be pushed to the utmost extreme, visitors to the exhibition are reminded that mobility within the continent such as rural to urban migration far exceeds mobility from Africa to what Mpho Matsipa coined, “northern centers of global capital”.

Opportunities for evaluating the relationships between African and Northern countries are countless within the exhibition. Another example is the project Island Crossings: Between Myths and Hallucinatory Realities by Patti Anahory and César Schofield Cardoso. The images of drums of second hand clothes shipped to Cape Verde, juxtaposed with the houses in the USA from which they were sent, highlights the connection between the economies of the global north and south. A sense of detachment caused by the lack of commentary in the video allows space for self-reflection without imposing a moral standpoint.

One point of critique on the exhibition may be that the exhibits are occasionally very complex, which makes it more difficult for the exhibition to fulfill the role of mediator between Africa and the Global North for all audiences. An example is the project Cartographic Entanglements by Dana Whabira, Nolan Oswald Dennis and Thembinkosi Goniwe, which rounds off the exhibition. Despite its immediate aesthetic and aural appeal, it takes several moments of reflection before and after reading the accompanying essay, to get a grasp on the cartographic timeline mapping three different networks onto each other: the cities connected by the Cecil John Rhodes Railway Line whose urban development was strongly influenced by it, the development of infrastructure caused by the railway, and the timeline of resistance music inspired by the railway which represents the spread of ideas in the region.

On the other hand, the visitor who engages with the installation will gain increased pleasure at every further layer of meaning they discover. Oversimplification would not do this piece justice. Fortunately, there are also projects such as 3×3: Geographies of the Kitenge Trade, which engage from the grassroots level. 3×3 project does so by introducing Elvis, a kitenge trader in Kampala, Uganda, and his efficient shop.

Another point for presenting complex projects was made at the well-visited first guided tour of the exhibition. Questions by local visitors who did not understand certain aspects of the exhibition were not only answered by the curator, but also by visitors, notably locals of African descent launching the group into an animated discussion. The sentiment that the kind of representation of themselves found in the exhibition is long overdue was expressed several times at this tour and at the opening of the exhibition by Munich based people with a migrant background.

The exhibition encourages everyone to engage further, for example with the Chimurenga Library. It is not only a reason to spend more time in the exhibition, but can be used for discussions and gatherings such as a listening session that was held there after the conference. I believe many places in Africa and beyond could benefit from a space like this, which is one of the reasons I am hopeful that the exhibition will travel to reach a wider audience. Whether this occurs or not, African Mobilities and Munich Exchange have planted many seeds. My hope is that all of them do live past the inspired and emotional moment of their conception, and blossom. 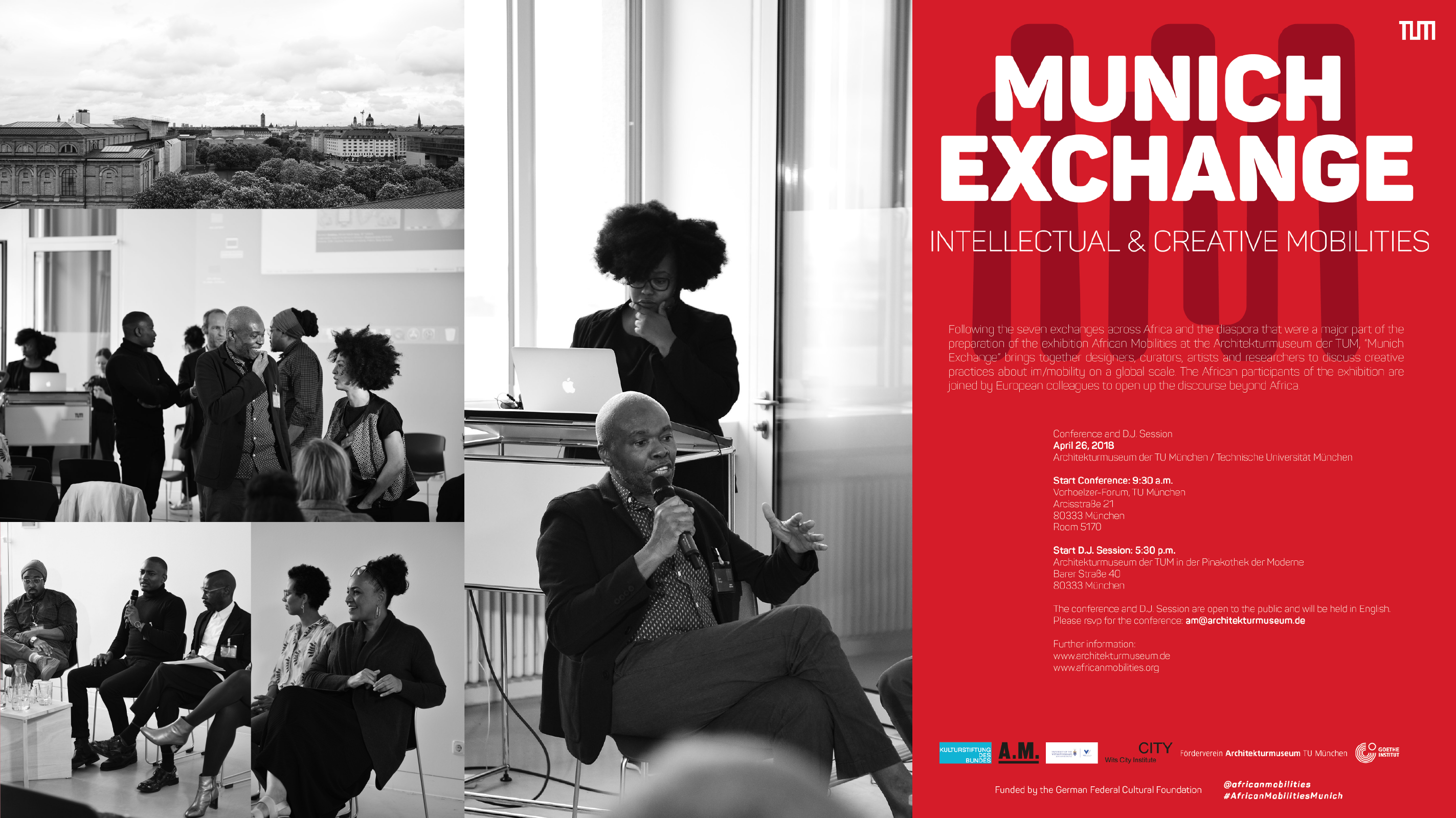